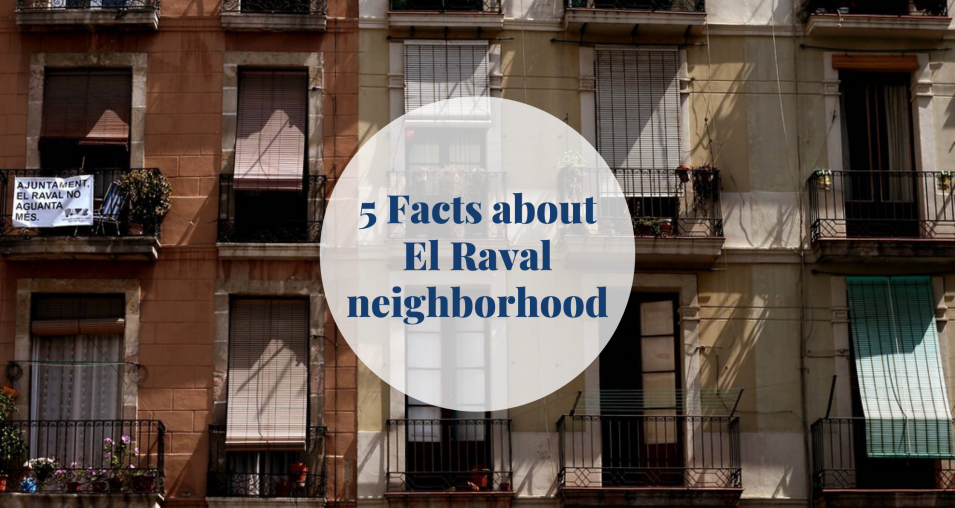 If El Raval neighborhood was a person, we could say that he has two personalities. Indeed, in the North of El Raval, it will be his bright side with the Boqueria Market, the MACBA’S fascinating collections, the Palau Güell and the art shops. On the other hand, in the South of the neighborhood, it will be his dark side with its most eccentric bars and restaurants like Barri Xino. Despite its reputation as the most wicked neighborhood in Barcelona, you can not ignore this neighborhood because we find the oldest bars, vintage shops, and street art. There is an anecdote that I must share with you, El Raval has become a place so trend today that the inhabitants of Barcelona have invented a verb to say to walk in El Raval: Ravalejar.

So, if you want to know all the other facts about El Raval, keep reading!

The Marsella Bar was founded in 1820, so it is the oldest bar in Barcelona. It was very famous in the Bohemian era because several artists went there; artists such as Rimbaud, Baudelaire, Van Gogh or Hans Christen Andersen, who wrote the Little Mermaid. According to him, the bar had a Parisian atmosphere. Hemingway, Picasso, and Dalí were regulars at the bar; and it was here that they found inspiration for some of their works. However, there was a time when the bar almost went bankrupt; but the inhabitants of Barcelona demonstrated to preserve this mythical place and the town hall finally agreed to buy the bar for more than a million euros. If you go there, you must order a glass of absinthe, Hemingway’s favorite drink. And if there are no more places, the other two historic bars, La Confiteria, and Casa Almirall, in the Catalan capital are also in Raval.

# 2 Tribute to Joan Miró by Sixe

Do you probably know the Foundation of Joan Miró which is a private cultural center that aims to preserve and exhibit the works of Joan Miró? Well, “Ciutat Bella” is a project initiated by Arcadi Poch of Kognitif. She made murals art in the heart of Ciutat Vella, in the district of El Raval between 2014 and 2015. This project honors Joan Miró, he wished that his art continues to live and be admired by all; so what better than street art for that? This project also aimed to promote the values of coexistence and citizenship through art.

There is a host of vintage shops in Barcelona. However, some items can be quite expensive; so if you want to express your vintage style on a budget, the street of Riera Baixa in the El Raval district is for you. This street is further filled with second-hand shops and offers vintage from every angle; pieces as affordable as original. If you want inspiration to perfect your colorful and expressive street style, we have selected the best shops in the area. First, for an urban style, go to Career Tallers.Second, if you want to go to a concept store, do not miss the Holala Plaza, which offers vintage clothing but also furniture; and they often organize many cool events such as street art shows or pop music concerts! Third, if you’re a fan of vintage clothing, then head to Flamingo Vintage Kilo, which, as the name suggests, sells by the kilo. Finally, note that every Saturday at 13:00, the shops of the street of Riera Baixa expose their most beautiful items in the street. Thus, it creates a market alongside that of locals who set up their own tables with second-hand clothes. Vintage hunters, we are waiting for you many Saturdays, on your marks, ready, go! Open your eyes wide when you walk in the narrow streets of El Raval not to be next to a small modernist café and decorated overhanging: the GranjaViader. This is the perfect place to enjoy the typical hot chocolate, named suis. It was Pablo Picasso’s favorite drink. The pastries are made in the Vadier’s kitchens; including cheesecakes, tarte Tatin, and churros, for instance. We advise you to order the famous hot chocolate with melindros! Now a little history about this lovely place. The coffee Vadier was previously a dairy, it was founded in 1870. The coffee takes its name from its owner Marc Vadier. His business was so successful that he hired his five sons and the café became a family business. Currently, this is the fifth generation of the family who runs the café. Of course, the GranjaViader continues to manufacture cheese, yogurt, cream, and other dairy products although the leading products are now hot chocolate and pastries. Despite the fact that the Viader is very visited by the tourists, the inhabitants continue to appreciate it and to frequent it as much as in the past. The Viader is so authentic and full of charm. # 5 The film library of Catalonia

The film library was formerly in Sierra. Then, the representatives of MACBA, the big theater of Liceu, the CCCB, the library of Catalunya and many other institutions have decided to lead a major rehabilitation project in the heart of El Raval. It is in this sense, they moved the film library of Catalunya in the heart of Raval; in order to impose the neighborhood as one of the major cultural centers of the city. The Cinematheque, therefore, occupies a building of 6000 square meters and the films broadcast are a selection of classic but also recent works. It’s not just a cinematheque, it’s a very large project. You will also find a cinema library, a bookstore, a café, offices, and an exhibition space. In addition, the project plans to organize additional exhibitions, demonstrations, and guided tours as well as the implementation of educational projects.