Home / About Barcelona / The Gothic Quarter in Ciutat Vella – Barcelona

The beautiful neighbourhood known as the Gothic Quarter used to be the Roman village, therefore the historic Barri Gòtic in Ciutat Vella has many remnants of its historic past. The Gothic Quarter is one of the most famous areas of the city, located in the heart of old Barcelona. The Gothic district’s narrow streets intertwine to create a maze, infused with history and legends of a bygone era. This rather small but ample part of the city was built, mainly in the 14th-15th centuries on the site of the former settlements of the Roman Empire. The Gothic Quarter is many people’s favourite district in Barcelona, both locals and visitors, here is a guide to the heart of the Ciutat Vella.

What to see in the Gothic Quarter?

The narrow, winding streets in this area create a web of walkways, so if you’re heading somewhere, give yourself some time to get to your bearings! Be sure to always keep your head up or you may miss some of the best bits. Whilst strolling through this quarter, you will walk past the merchants’ palaces of Carrer Montcada, the watchtower of the Plaça del Rei or you can admire the cloisters and choir stalls of the magnificent Gothic Cathedral. If you go beyond the medieval trappings, you will find remnants of the ancient Roman city of Barking where the must-see Picasso Museum is located. You can even visit Les Quatre Gats,  famous for being the site of Picasso’s first exhibition. It was also known to be his favourite spot in Gòtic for a drink.

Shopping is also incredible in the Gothic Quarter, from the more commercial area of Calle Portal de L’Angel to all the little boutiques on Calle Avinyo. Make sure you walk around to experience all you can; the Gothic Quarter is perfect for an afternoon stroll, with many walking tours available of the area. At the top of Las Ramblas, you will find Plaça Catalunya which leads to onto Passeig de Gràcia, home to many designer shops and Antoni Gaudí’s remarkable buildings. Where to eat in the Gothic Quarter?

You will be spoilt for choice of restaurants and bars, especially around Plaça Reial which is  bustling day and night. The night-life in the Gothic Quarter is very active, with many places to drink and dance. Calle Ferran, one side of  Plaça Reial and leads up to Plaça Sant Jaume, is also fantastic for bars and cafes. Here you’ll find Satan’s Coffee Corner which has a reputation for the best coffee in the district. Federal is a good place to grab  brunch on a lazy Sunday. The street Petritxol is a very cool place to hang out. You will bump into two famous churros places here and many fine bakeries. The street is one minute away from La Rambla, and it is definitely worth an adventure.

Accommodation in the Gothic Quarter:

In terms of location, the Gothic Quarter gives you excellent access to many of the city’s main attractions, being so close to La Rambla means that everything is within walking distance. In terms of accommodation in Barcelona, for your stay there are numerous, remarkable apartments available to rent for family holidays, visiting with a group of friends or even rooms for couples. There are endless advantages of living in the Gothic Quarter, from the beautiful historical sites to the buzzing nightlife; it’s the perfect holiday destination. There are some amazing apartments available to rent in the Gothic Quarter. History of the Gothic Quarter of Barcelona

Behind the history of Gotic’s buildings, there is another secret city of folk tales and arcane traditions, many of which were collected between the 1920’s – 50’s by the remarkable Catalan folklorist Joan Amades. One of the most famous is the tale of the Jewish alchemist and his daughter. The last building on Arc de Sant Ramon del Call was owned by the alchemist. He had a beautiful daughter, in which the old man adored. Rumors about the beauty of the girl came to a young Christian knight, who, by all means, captured the coveted heart of the young maiden. But, much to his regret, she refused to marry the knight. The young man became enraged with anger and so he went to see the famous Jewish alchemist and told him he wished to avenge a disloyal lover.

The Alchemist in the dark about the purpose of the substance accepted the rich man’s seven gold pieces and made a unique formula. To which he planted a few drops of the deadly liquid on the young nobleman rose, designed for the daughter of the alchemist. Receiving the bouquet from the knight, she inhaled the alluring fragrance, fell unconscious and died in terrible agony at the hands of his father. He had killed his own daughter and was disconsolate. By way of penance, he avowed to wander in the wilderness for the rest of his life, but before he did, as the crowd gathered around, watching him lock shut the doors of his home for the last time, he uttered a curse for all to hear that anyone who came to live in this house would meet the same fate as his daughter. And so it stayed empty. 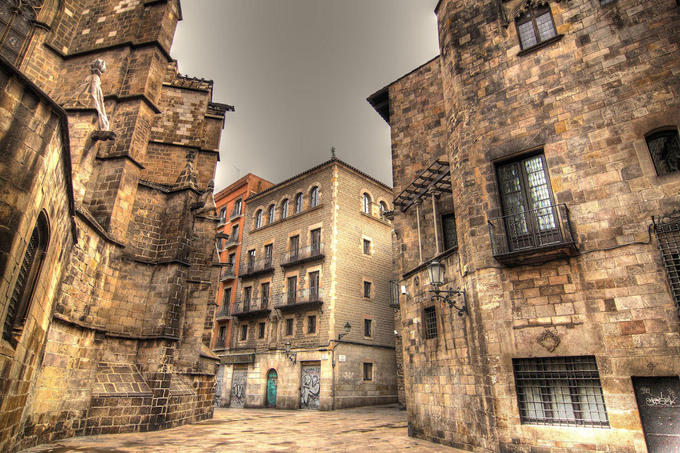 NOTE that once you cross the Via Laietana road, you are no longer in the Gothic Quarter. This is now the La Ribera area.

Previous: Best City Tours in Barcelona
Next: The 5 Best Coffee Spots in the Gothic Quarter