Home / About Barcelona / Casa Mila and Casa Vicens: A Look into the Fascinating Architecture of Gaudi

in About Barcelona 8 days ago 0 63 Views

Casa Mila, also known as La Pedrera, is a modernist building located in the Passeig de Gracia neighbourhood of Barcelona, Spain. Designed by renowned architect Antoni Gaudi, it was constructed between 1906 and 1912. It is considered to be one of Gaudi’s masterpieces and a prime example of his unique architectural style.

The building features undulating stone facades, curved lines, and organic forms, which reflect Gaudi’s inspiration from nature. Casa Mila is now a UNESCO World Heritage Site and is open to the public as a museum, allowing visitors to explore the building’s history and design. 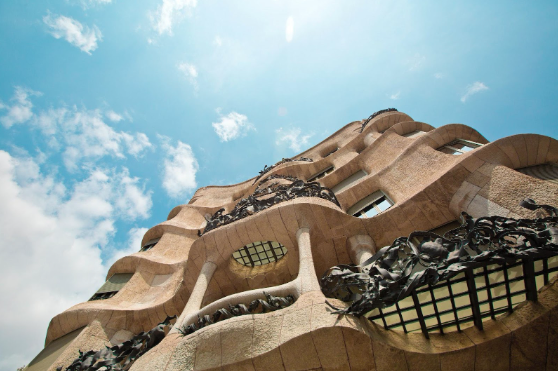 Antoni Gaudi’s Casa Milà looks more organic than man-made with its undulating façade and surrealist sculptural roof, as if it were cut directly from the earth. The structure, often referred to as La Pedrera, the quarry, was influenced by the Modernista movement, Spain’s equivalent of Art Nouveau.

The structure, which was built in 1912 for Roser Segimon and Pere Milà, has nine levels: a basement, a ground floor, a mezzanine, a main floor, four upper floors, and an attic. The main floor served as the Milàs’ floor, the mezzanine as the entrance, and the higher floors as the garage. Two inner courtyards are encircled by the structure, which has a figure-eight shape overall. The renowned sculpture terrace is located on the roof. Practically, it shelters chimneys, emergency staircases, fans, and skylights, yet the envelopes of each function have an independent sculptural quality that has merged with the structure as a whole.

The building is divided structurally into its structure and skin. There is no load-bearing purpose for the stone façade. The weight of the facade is supported by steel beams attached to the building that have the same curvature. Gaudi was able to create the façade without worrying about structural limitations, which finally led to his idea of a continually curved façade. The roof’s supporting structure also permits an organic geometry. The spine-like rib structure, made up of 270 parabolic brick arches of various heights, produces a diverse terrain above it.

Formally, the façade can be divided into three parts: the street façade, which covers the ground level; the major façade, which covers the main and upper floors; and the roof structure, which contains the attic and provides support for the roof garden. The main façade’s curvature, which is made of limestone blocks, has a substantial, organic quality to it. Surrealist anthropomorphic sculptures are perched on a curved mass that rises over it. Their presence adds to the aesthetic of the building’s nearly flowing motion.

The Casa Milà is unquestionably one of the Barcelona landmarks that you “must visit.” This structure was designed by Antoni Gaud, who produced a true masterpiece. It belongs on the UNESCO World Heritage List since it is one of his most well-known pieces.

The ultimately divisive Casa Milà made a significant contribution to the Modernista movement and modernism as a whole. Gaudi’s deliberate use of natural and organic forms in the building’s shape substantially influenced the practise of biomimicry. It also pushed the formal limits of rectilinearity. The Casa Milà is proof that Gaudi was a genius of form and structure.

A modernist structure called Casa Vicens is located in Barcelona’s Gràcia neighbourhood. It is the creation of architect Antoni Gaud and is regarded as one of his first significant works. Although Gaud created the initial drawings between 1878 and 1880, it was actually constructed between 1883 and 1885. The piece is in the orientalist tradition and resembles Neo-Mudéjar architecture, but Gaud interpreted it in his own distinctive manner, giving it a special quality that only he was able to add to his creations. Gaud originally described several of his constructive tools in this book, which would later become commonplace elements as Modernism emerged.

In addition to the home, the first idea included a sizable garden space, but over time, the land was broken up and sold to make way for residential structures. Today, all that remains of the property is the home and a tiny yard. Gaud created three facades to make the most of the available space, with the home connected to the adjacent convent by a dividing wall. When the home was to be extended in 1925, Gaud was offered a commission; however, he turned it down. Instead, he gave it to one of his proteges, Joan Baptista Serra, who constructed an addition in the same manner as Gaud’s original structure while also adding a new facade, resulting in the building’s complete detachment.

Given that Casa Vicens symbolises and incorporates a range of natural aspects into the overall design, it is one of the first examples of how the world of nature served as the primary source of inspiration for all of Gaud’s work.The cast iron gate at the estate’s entry, which depicts palm tree leaves before Gaud adapts them as an ornamental element for the ceramic tiles of the facade, is particularly remarkable.

This allusion to natural elements is not only visible on the exterior of the house, but Gaud also manages to bring nature indoors by incorporating various decorative arts, such as ironwork, painting, ceramics, carpentry, and mural decoration. This results in a seamless transition between the interior and exterior spaces. To experience the historical rich House Museum, book a Casa Vicens Tickets which is a demanding tour that appeals to all audiences, including a permanent exhibition and a stroll through Gaud’s original chambers that have been meticulously kept and renovated.

If you look past the ornamentation, you’ll notice the historicist Mudejar style and the forms, which draw inspiration from both Indian and Japanese architecture. In order to escape the austere aspect of classical architecture, the building’s corners were ridged, and Gaud paid particular attention to them. The wealthy classes in Barcelona at the time enthusiastically welcomed this orientalized exoticism. This is why it shouldn’t be surprising that Gaud’s first structure had a lot more positive response than his later iconic structures, like “La Pedrera.”