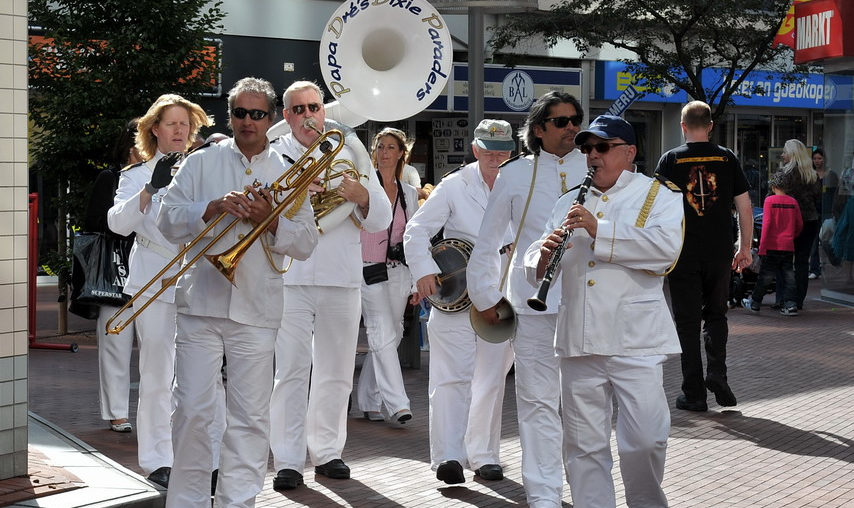 Sitges is a city widely known for its beaches and parties. The beach resort is located 30km south away from Barcelona, the capital of Catalonia. Although people usually go to Sitges looking for a relaxing holiday on the beach, the city has many cultural propositions. Among the museums and events the city hosts, the Jazz Festival is one of the most recent ones.

The Festival Jazz Antic Sitges, or JAS! Is a new festival that had 2 editions on the previous years. The cultural event consists of bringing the most traditional jazz, Dixieland jazz, typical from New Orleans to the main streets and establishments of Sitges. The festival hosts free concerts, street parades lectures at schools and restaurants that are participating have jazz bands and musicians over for jam sessions during lunch and dinner times.

The main parade of Jazz Antic Sitges has over 20 musicians playing jazz non stop.  The parade starts at the city hall square through the main streets of the city center until the beach. Some other events involve sessions on the beach all day long.  Although it is a very recent festival, the JAS brings the best jazz musicians of Catalonia together for a great street party.

The festival is held at the beginning of spring. In 2015, it happened from the 9th until the 12th of April.  The 9th of April had the artists Durny Sweet, Valentin Moya Trio and Fleurs de Florine performing. There were also school auditions at the Prado Casino. The following day, the schedule had free concerts by the Jazzicots band and a Dixieland session at the Palau del Rei Moro.  On the 11th of April especial guests from the International Dixieland Festival of Tarragona arrives to merge with the Jazz Antic Sitges. That day the main parade was held and jam sessions are seen at the Bacardi House. The last day, 12th of April, there are swing sessions all day long at the Fragata beach, one of the main family beaches of Sitges.

Sitges is easily accessible by train as it has two main train stations. There are trains leaving from Barcelona all day long from Sants Station and Passeig de Gracia. In case you want to take a break from your stay in Barcelona, Sitges is perfect for a daytrip. If you wish to experience the festival as a local, make sure to get the perfect place.  Barcelona-Home has several apartments spread throughout the city and one of them will be perfect for you!