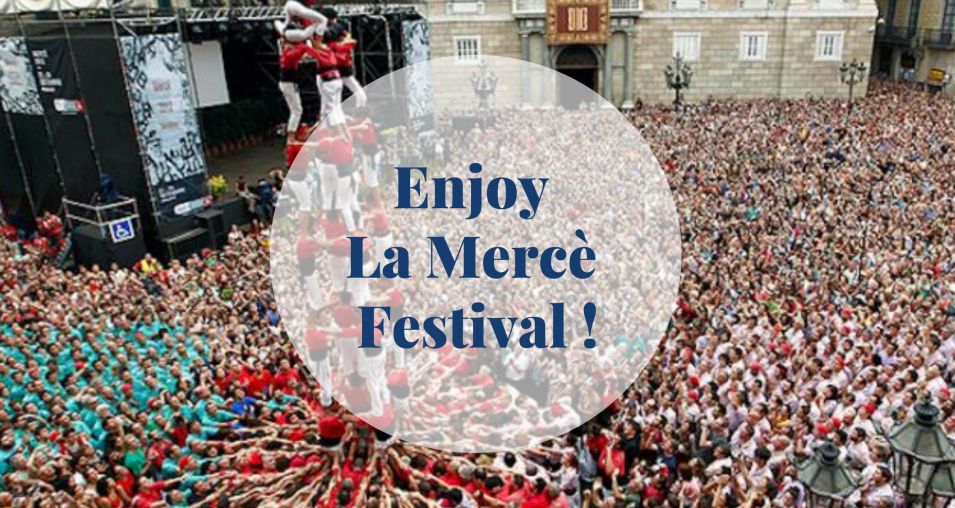 Once again at the end of September, Barcelona will celebrate its biggest festival of the year. La Mercè Festival is the largest street party that lasts for 5 days. Indeed, the festival has been celebrated since 1687, when, according to the legend, the patron saint Mare de Déu de la Mercè freed Barcelona from a plague of locusts. The thankful residents of the city have decided to honour her by celebrating to the fullest on the anniversary of her great act.

To know what La Mercè is really all about, you’d have to be there yourself. All of you lucky ones to be here, don’t miss this wonderful opportunity to experience some of the best Catalan traditions. And we will help you to get to know about the main festival events of La Mercè.

The legend goes that on the night of the 24th of  September 1218, the Virgin appeared simultaneously to King Jaume I, Saint Pere Nolasc and Saint Ramón de Penyafort. She asked all three to create an order of monks dedicated to saving Christians imprisoned by the Saracens. It was the time of the wars of religion.

Centuries later in 1687, Barcelona suffered a plague of locusts, and placed itself in the hands of the Virgin of La Mercè. Once the plague had been overcome, the Council of the City named her patron saint of Barcelona. The Pope did not ratify this decision until two centuries later  in 1868.

The Human towers or “Castells”

Castells is the Catalan word for castles and castellers are the people who form an incredible human tower which can be up to 10 floors in height. Just like in architecture, there are many styles of towers: with 2, 3, or even 5 people on each row… Just listen for the music during its construction. It is changing tunes and gives information to the castellers regarding the stage of the tower. Once the person at the top raises a hand, the castle is built! This event takes place on Plaça de St Jaume and is one of the highlights of the Mercè festival. Thousands of people will pack on the square so it is worth arriving earlier. 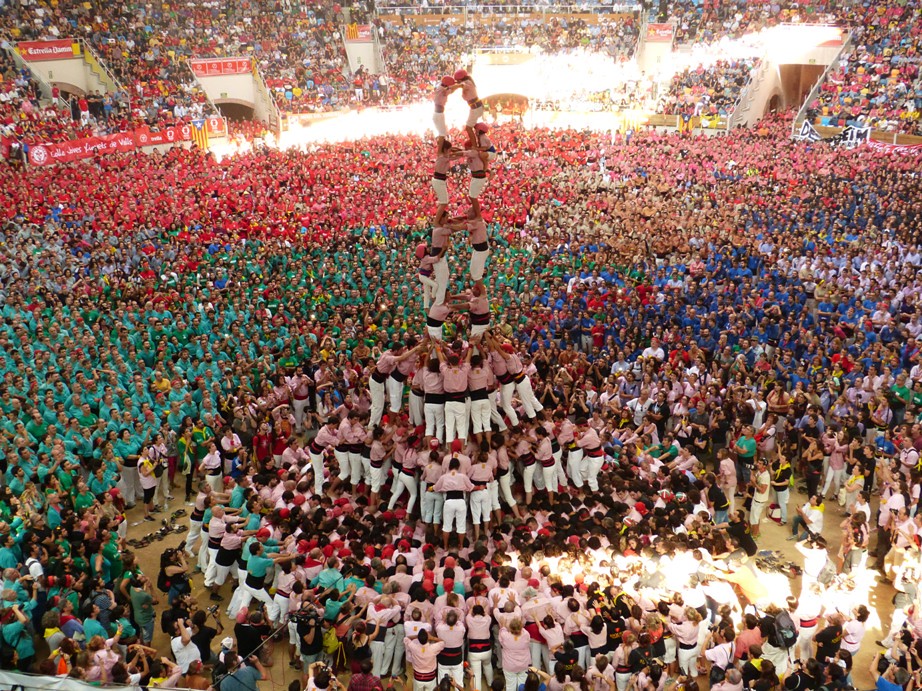 The Giants parade or “Gegants”

The Giants parade is a perfect event for the whole family and is one of the longest standing traditions of the city. The giants sometimes measure higher than 4 metres, weighing up to 63 kilos. A hot and heavy job for the person carrying them underneath the skirt. You will see kings, queens and biblical figures alongside fishermen, thieves or butchers, all marching through the streets and representing their local neighbourhoods. These huge figures tower above the crowds and spin around and around so the crowds can see them in all their glory. The Parade is often accompanied by small percussion groups that beat out a rhythm on drums as the Giants go by.

If you are interested to see them, come to Plaza de St Jaume before the beginning of the event, at the very start of festival on 19 September (this spectacle is called “Toc d’inici”). It’s the best way to get familiar with typical dances of the giants and beasts while celebrating the start of La Mercè.

There are also the beasts and dragons parade, which is not the same as fire run (“correfoc”), so if you prefer a quieter experience, this is the perfect parade for you (no bangers or fire involved).

The “Correfoc” or “Fire run” 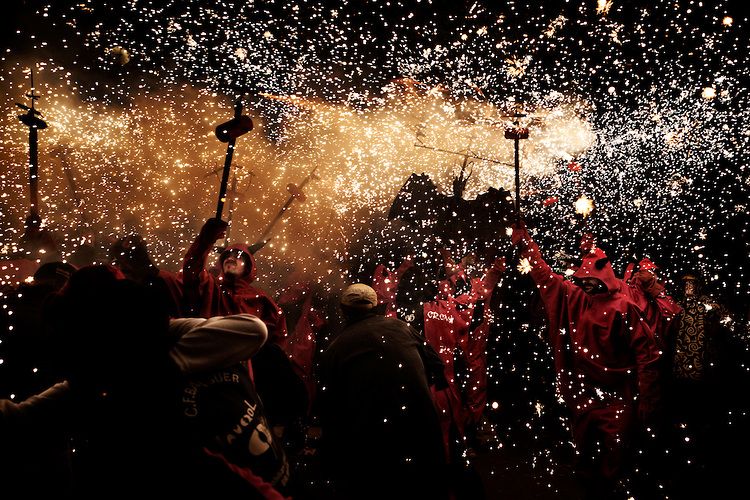 It is a spectacle with hundreds of people dressed as devils while pushing the city beasts down the street. It is an unique experience that you will not easily forget. If you want to be in the front rows, remember to wear a cotton cap and long cotton sleeves as the devils will chase you with their giant whirling sparklers. It is all part of the fun. There are normally 2 types of Correfoc on the same evening. One of them is for the children and is more tame than the “adult” version, which happens later on in the evening. This event takes place on Via Laietana, between Plaça d’Antoni Maura and Plaça Antonio López. 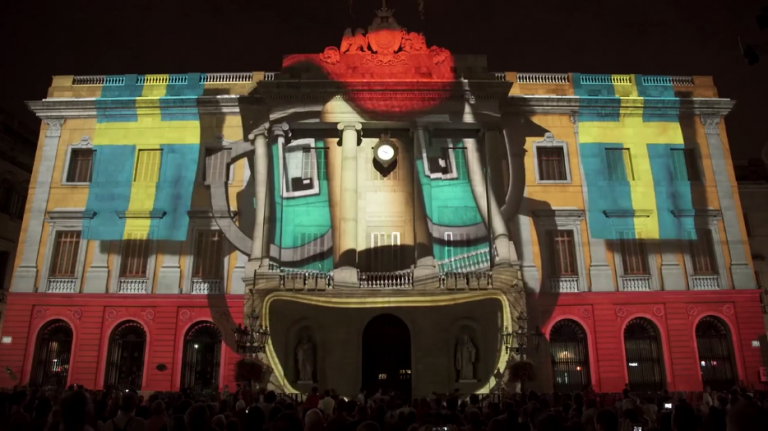 La Mercè and Culture Festival of Stockholm have jointly created this year’s show and for the first time, the mapping of festival La Merce takes the form of a fictional story. At Plaza St Jaume there is the famous projection show during the evenings where images are projected on the buildings on the square. The show takes place multiple times each evening and is free for anyone to attend.

Fireworks at the beach and the Piromusical show 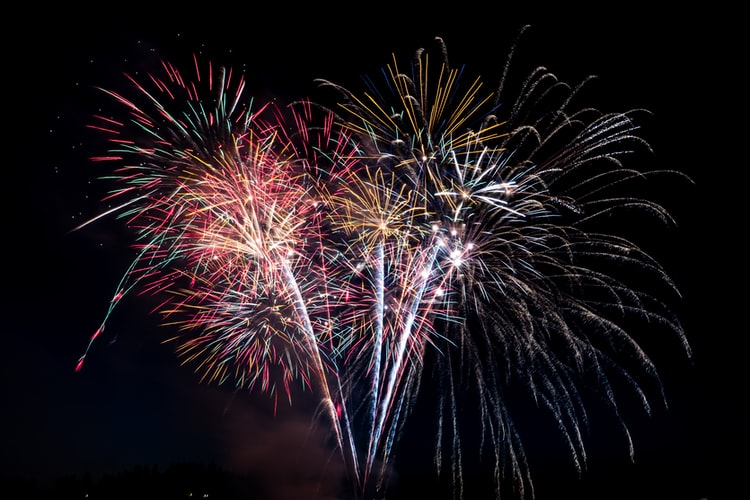 You can’t miss these long fantastic fireworks on Friday, Saturday and Sunday night (19-21.09), which you will see from anywhere at the beach. Sit on the sand and soak it all in. Piromusical is the closing act, a magnificent show which takes place in front of the National Museum of Art.

The Magic Fountains of Montjuic 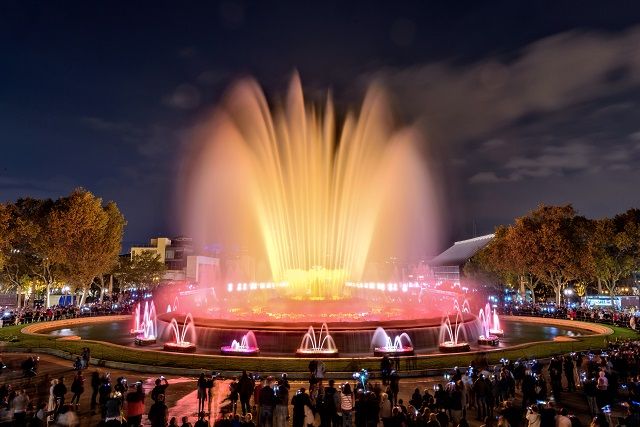 It will be bursting with visually pleasing, colourful water acrobatics, while the fireworks complete the mind blowing view. The endless crowd of people bathe in light of the fireworks and sparklers. The show is played in the rhythm of music, such as The Beatles in 2010 (Check the video below!) The show goes on for about half an hour and is the final big bang to end La Mercè. The fireworks can be seen from all over the city, but for the best experience and to see the whole show we advise you once again to be there early.

There are many other activities you can participate in. For example, you can enjoy different concerts every evening, because BAM comes to Barcelona with La Merce! BAM is the “Barcelona Action Musical”. The BAM Music Festival takes place at various sites in the city and Parc del Forum, Plaza Real, Joan Corominas Square and Plaza dels Angels. Every year many artists perform at the Mercè festival. It’s perfect for people who love Rock, Pop and Indie sounds with an electronic vibe. 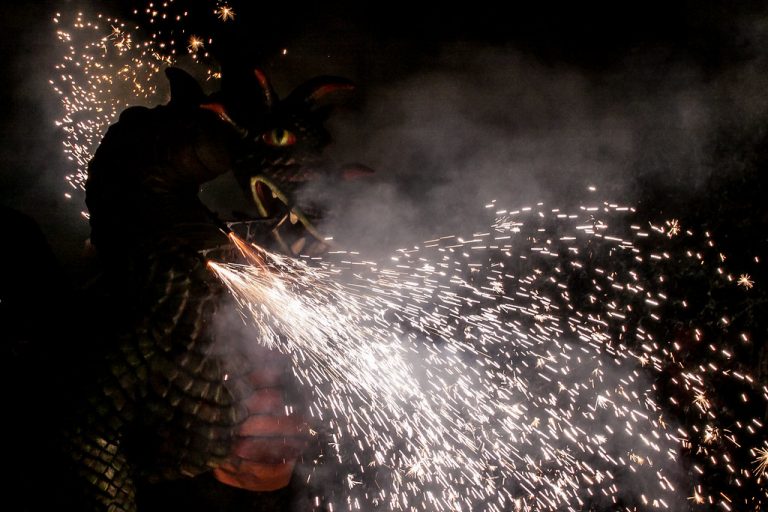 Furthermore you can enjoy one of the concerts with diverse type of music which will take place at Plaza Catalunya. Moreover, there will be big pop and electronic music parties at Plaza Espanya.

If you would like to see street artists’ performances, come to MAC festival which takes place at Parc de la Ciutadella. Indeed, you will see many artists and acrobats performing amongst the public. Additionally, the Merce has a multicultural selection of music, exhibitions and competitions of all ages. Also don’t miss a chance to visit for free la Sagrada Familia (19, 20 and 21 of September) and Barcelona museums during Day of Merce, 24 of September, or during one of the days of the festival (19.09- 24.09). If you like theatre, you can enjoy some theatre performances for free as well.

For a daily timetable, please follow this link:  La Mercè 21 in English!