The Museum of Cau Ferrat is located in Sitges, the famous Catalan beach resort. Cau Ferrat lies on the coast of Sant Sebastian, one of Sitges’ most popular beaches.  The museum was founded as a home workshop of Santiago Rusiñol, the leader of the Catalan modernism movement.  It contains collections of ancient and modern art gathered from well-known artists such as Pablo Picasso and Rusiñol himself. 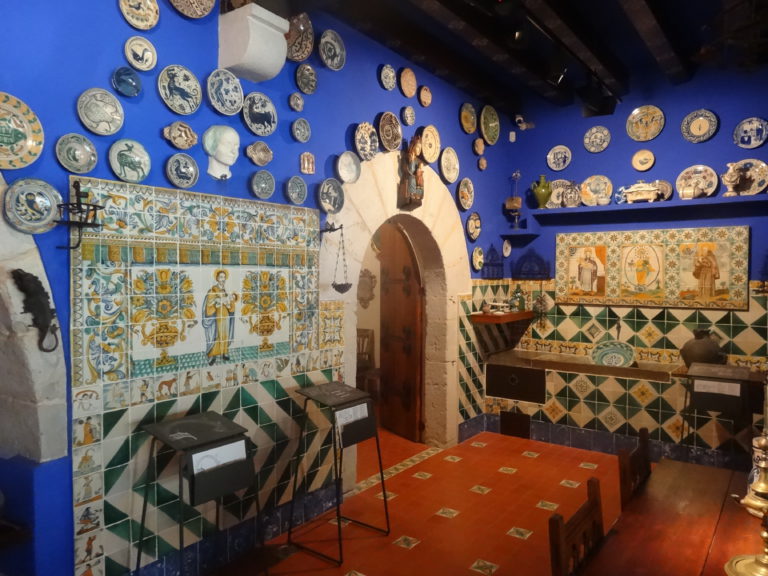 Rusiñol was part of a middle-class family and was meant to follow the family’s tradition to become a cotton manufacturer. Rusiñol chose to follow a different path, and decided to join the artistic scene of Catalonia. Sitges was the place chosen by Rusiñol to spread his religious theory of the total art when art is considered to be a religion. The movement made Sitges the Vatican of Modernism and Rusiñol the Pope of the movement. He aimed to transform society through art and culture, and he was able to create whole mythology around his figure.

The building was left on a will to God, and after authorization of sale from the Ecclesiastical Court of the Diocese of Barcelona in 1893, the house was sold. Rusiñol renewed the place to make it his home and studio, and named it Cau Ferrat, as it was the name of the studio he had lived at in Barcelona. One year later, he bought the house next doors and incorporated it into the building as we know it nowadays. In 1895 he celebrated the 3rd Festa Modernista, the cultural event largely celebrating modernistic wave. He scheduled it on the same day he received two paintings by El Greco he had acquired in France a few months earlier.

Nowadays the museum has collections of paintings, drawings, and iron sculptures, which are made up by Rusiñol’s favorite pieces, the ones he had an emotional connection with. Many pieces of famous Catalan artists are also exposed, such as Pablo Picasso and Ramon Casas. The artwork represents Rusiñol’s personal tastes and preferences and also many of the time’s trends in art. Most of the work was done by the artist himself. The museum has a collection of glassware that has over 400 pieces acquired by him. It is divided into a modern and antique glass collection. The furniture and sculptures are also part of the collection, although they might pass unnoticed as decorative pieces. The museum also exhibits a wide collection of ceramics with over 200 pieces concentrated mainly on the ground floor of the house.

Museu Cau Ferrat is one of Sitges’ main museums and is located downtown the village. There are various options for getting to Sitges from the city of Barcelona. The fastest option is a 30 minutes train ride, but it is also convenient to take a bus running late at night as well.

Looking for an apartment in Sitges? Check out our SPECIAL DEALS ON APARTMENTS with Barcelona Home!

Previous: Customer Experience Barcelona-Home
Next: What to Do This Weekend, February 8th-10th