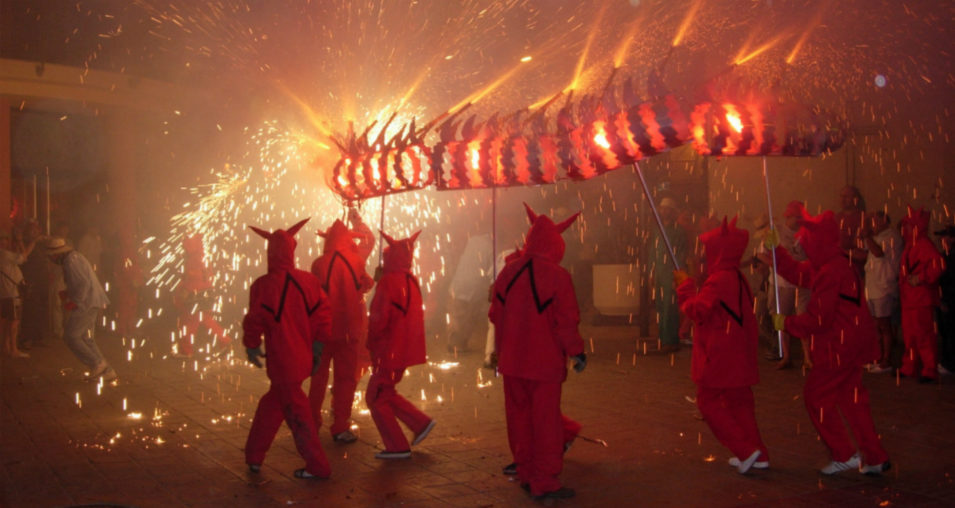 The Santa Eulalia Festival 2016 is one of the biggest annual festivals of Barcelona. The festival is especially amazing to attend with your younger ones, because it is actually a festival meant for children. There will be more than one hundred activities, including shows, concerts, open-house events, and much more.

Santa Eulalia Festival 2016 will be held from Thursday the 11th of February until Sunday the 14th of February.

Fiesta de Santa Eulalia is also known as the ”La Laia” (a nickname for Eulalia) festival and is dedicated to Eulalia, a Saint of Barcelona. The official Santa Eulalia’s day is on the 12th of February, so the festival is celebrated around this date each year. Most of the activities will take place in Placa de Sant Jaume. If you’re seeking accommodation near the festival, please take a look at our Apartments in El Born and our Apartments in Barri Gotic.

Santa Eulalia was born in 290 A.D. and died in 303 A.D. She only lived thirteen short years. She lived in the countryside just outside the walled city of Barcelona, which is a district nowadays known as Sarria. During the reign of the Roman emperor Diocletian the Christians of Barcelona were persecuted and Eulalia (a Christian-raised girl) was tortured because she protested against the Roman governor Dacianus. According to the tales, she endured thirteen terrible tortures, including being rolled down the street inside of a barrel full of knives and crucifixion.

Since then Eulalia has become the patron of the cathedral, co-patron saint of the city of Barcelona, and patron saint of sailors. She is remembered as a martyr and honored throughout the city by many street names and statues. Eulalia represents youth, solidarity, and justice. Because she died on February 12th, 303 this day is celebrated annually in Barcelona as Saint Eulalia’s Day.

During the Fiesta de Santa Eulalia there will be loads of different activities to take part in. The festival will take place across the entire city of Barcelona, but most activities will focused around older neighborhoods of the city, including Ciutat Vella. A very important aspect of the festival each year is music. Throughout the festival there will be children’s orchestra’s performing all over the city. 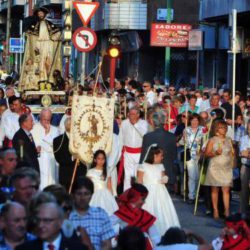 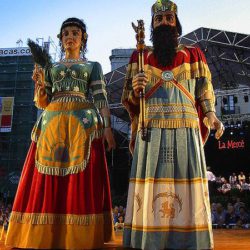 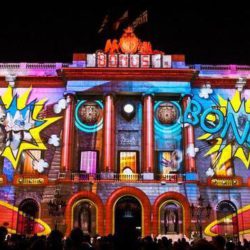 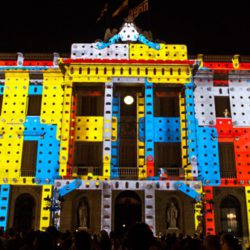 Next will come a series of parades with fantasy figures, giants, human towers, Catalan folk dancers and fire runners!

Here we will highlight some of the main events for you, but there are many more activities each day. If you are only planning to go one day, make sure it is Sunday, because the best activities usually take place on that day! You can check the rest of the program on the official website (in Catalan) of Fiesta de Santa Eulalia.

The Urban Light Festival, Llum BCN, will take place on Thursday the 11th of February and will continue until Sunday the 14th. Llum Barcelona is part of Fiesta de Santa Eulalia and a definite must-see during this festival! Get ready to witness amazing light projection shows that will showcase the beauty of Barcelona by night. Buildings and courtyards all across Barcelona will be illuminated.

You can see the Llum Barcelona at the facade of Placa de Sant Jaume at the following days and times: 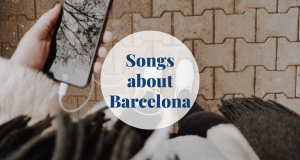