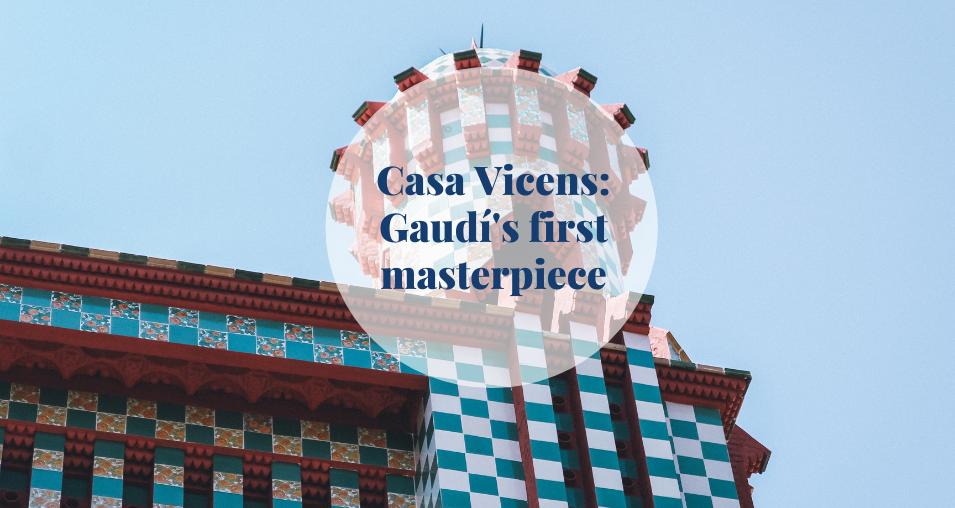 The Casa Vicens is Gaudí’s first masterpiece, a prelude to his later work. In this holiday home of the Vicens family, the architect revealed his unrivalled talent. Built between 1883 and 1885, it is located in Barcelona in the Gracia district. In 2005, UNESCO listed the houses as a World Heritage Site.

Antoni Gaudí i Cornet (1852- 1926) is a Spanish architect from Catalonia and also one of the most noteworthy figures in universal architecture. Barcelona, as known as the city of Gaudí, proudly owns 6 of his masterpieces that is listed as a UNESCO World Heritage. The mission of Casa Vicens as a museum is to raise awareness of the first home Gaudí designed, just as the architect conceived of it, and present it as an essential work for understanding his architectural language and the Modernisme movement in Barcelona.

As mentioned above, this architecture is his first individual work, located in Gracía. It was build between 1883-1888, for Manuel Vicens i Montaner. Vicens had two purposes with building the house: on the one hand, he wanted to live there and on the other hand, he wanted to present his own special azulejo (glazed tile) products of his industry in the building. 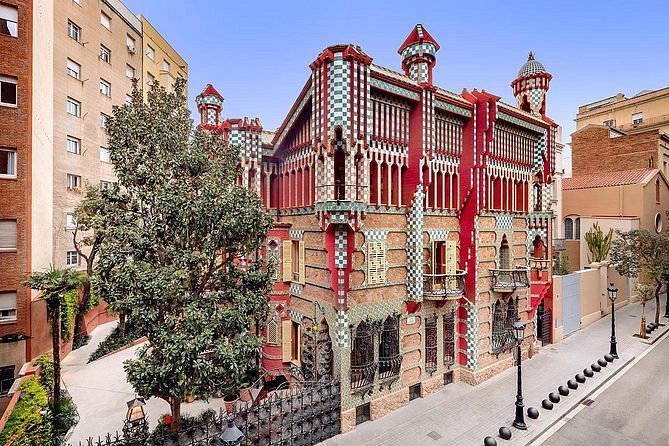 In this building, you can see the concept of architecture, which Gaudí later applied, such as the exaggeration of colors or the appearance of plant depictions, is reflected. Outside the house is mostly decorated with ceramic or azulejo decorations. The dominant colors are white and green and red. The owner, Vicens, had a quarry and a ceramic pot (he himself worked as a broker). The material was acquired in Valencia, and it was possible to produce elements and shapes only in one factory that Gaudí dreamed of in its construction. The building draws from Mudejar art, but Indian and Japanese patterns can also be discovered on the frontage.

In the interior garden of the house, you can truly recognize Gaudí’s style. The Arab influences are particularly noticeable here, especially in the smoking-room. The Casa Vicens is also surrounded by a beautiful building landscape.

Since the house now has a cultural dimension and a museum function, in the rehabilitation project the rooms corresponding to the 1925 extension were dedicated to the different services required by the public and the new cultural spaces. Thus, the rooms designed by Gaudí have not been modified. In order to allow people with reduced mobility to access the building and move around easily, a modern staircase has been installed where the old one used to be to connect the two spaces. On the ground floor is the reception area for visitors; the first and second floors are dedicated to the permanent exhibition rooms centred on the house, temporary exhibitions and the activities designed in the museum project. In the basement, there is a specialised shop/bookshop and the Capell. 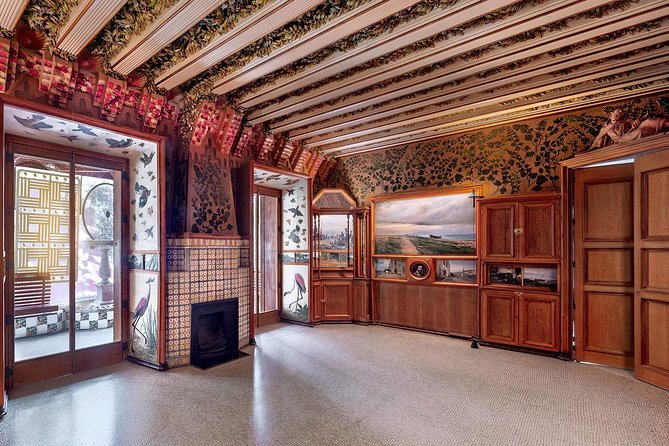 On the ground floor were the rooms used during the day. There is a dining room as a central space around which a covered gallery, a smoking room and an entrance are distributed. On this noble floor, the smoking room is a space for meditation and recreation. Its ceiling is formed by a structure of polychrome plaster muqarnas representing palm leaves with bunches of dates and the walls are covered with papier-mâché tiles that have retained their original green, blue and gold polychromes.  The dining room is a real work of art combining architecture and decoration. The original wooden furniture designed by Gaudí, the collection of 32 paintings by Francesc Torrescassana, the decoration with plant motifs on the walls and ceiling and the fireplace covered with ceramic tiles are all here. The dining room overlooks the gallery, with a marble fountain that keeps the space cool. 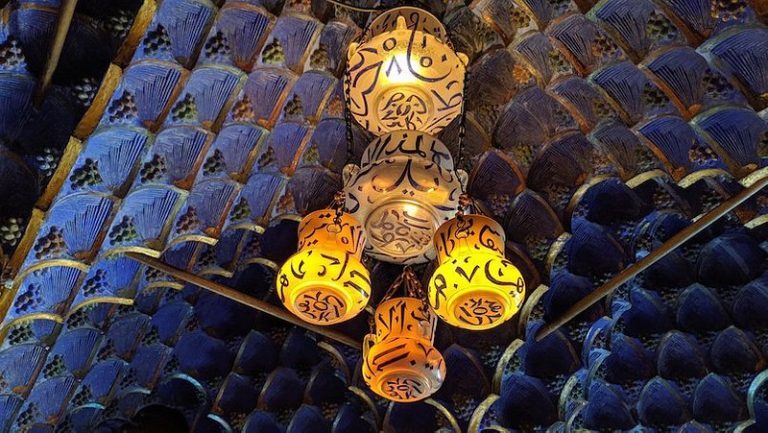 The first and second floors

On the first floor, there are two bedrooms, a bathroom and a living room. These are the private rooms, the most intimate of the Vicens family. The sgraffito paintings with their symbolic plant motifs flood and penetrate the different rooms. They give a taste of the Gaudí world.

On the terrace, located on the gallery, there is a wooden bench with a metal profile from which to peacefully admire the nature of the garden. The main bedroom looks directly out onto the garden, thus benefiting from all the necessary light and ventilation. Above the smoking room on the ground floor is a small room covered by a false golden dome with a superb trompe l’oeil depicting birds in flight and climbing plants, as if the room were connected to the outside.

The second floor is now dedicated to the permanent exhibition of the Casa Vicens. It offers visitors an overview of what they have seen or will discover along the way, depending on the direction of their visit. 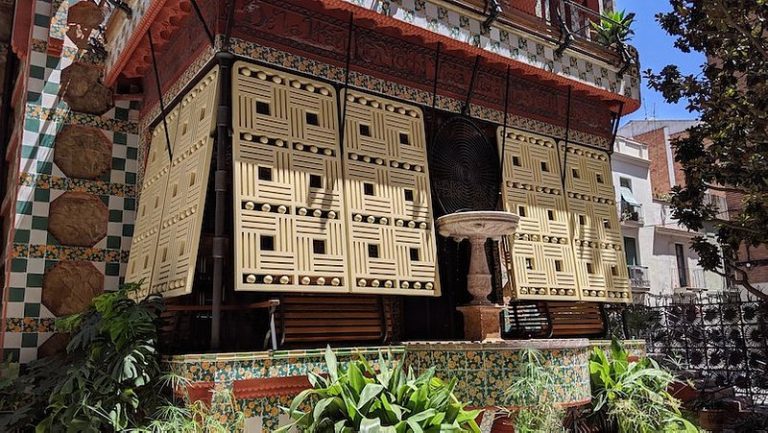 Gaudí created his first roof terrace in the Casa Vicens. It is a real belvedere, a space for escape and contemplation. On the other hand, a walkway borders the four inclined planes covered with Arabic tiles to collect rainwater. This roof terrace has a small cupola at the top of the tower. This roof, like the façade, is covered with green and white ceramic tiles. It bears witness to the influence of Islamic and Oriental architecture in Gaudí’s work. 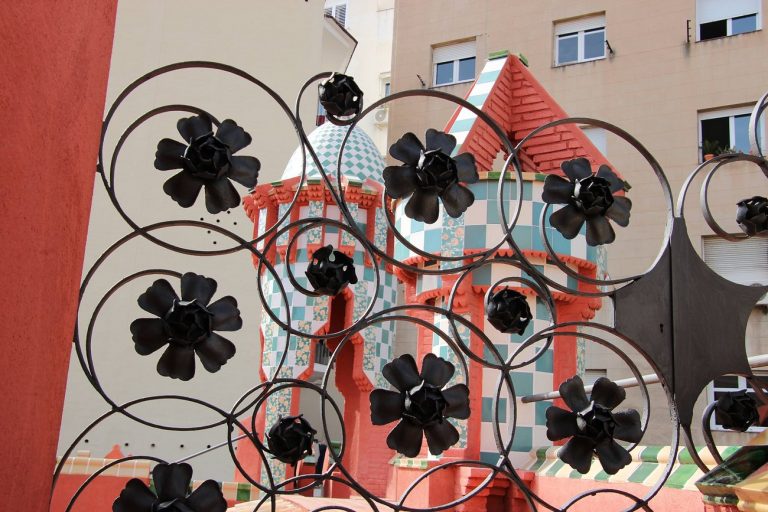 The current garden is the result of a study and reflection on the atmosphere of the Casa Vicens when it was created, as conceived by Gaudí, and on the gardens of the time. In this first masterpiece, the architect was already inspired by the Mediterranean flora and fauna that he emphasised in his work. They occupy an essential place in the resources and all the interior decorations. Since its creation, the garden has been reduced several times.

Casa Vicens is located in the heart of Barcelona, in the Gracia district, and is easily accessible by public transport.

Looking to rent an apartment in Barcelona? Check out our SPECIAL DEALS ON APARTMENTS all over the city with Barcelona-Home!