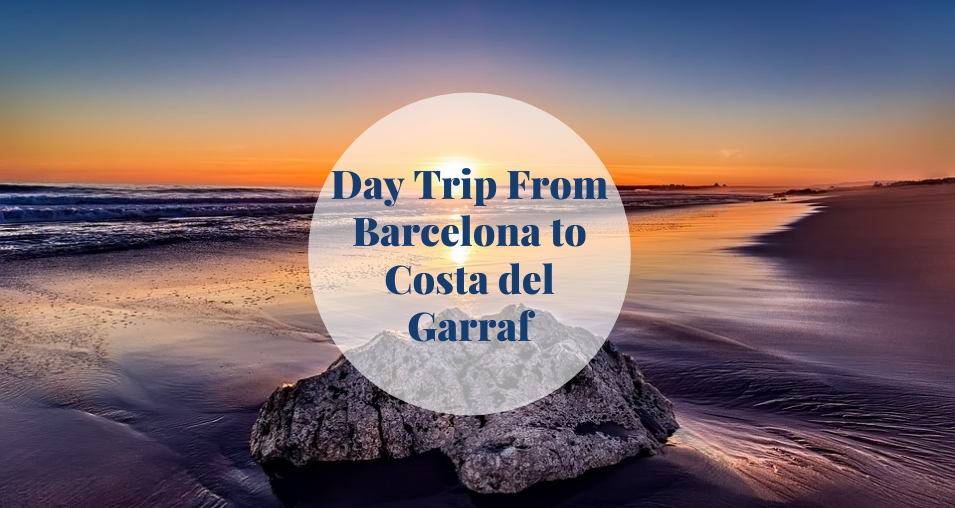 You have many options to get around Barcelona in just one hour. There are many things to explore!

We want to introduce you to the wonderful coastline just south of Barcelona and is perfectly suited for a DAY TRIP.  The Costa del Garraf is one of four coastal regions in Catalonia. It is connected to the Costa del Maresme and stretches from Barcelona to Vilanova i la Geltrú in the south. Because of its proximity to Barcelona, the Costa del Garraf is the house coast of the Catalan capital. In former times it was counted to the Costa Dorada. Well-known places on this coast are Castelldefels and Sitges. In the mountainous hinterland of the Costa del Garraf, lies the Parc Natural del Garraf. It’s dominated by Hills and little mountains. Therefore it is popular for hikers. With an area of 12,000 hectares spread over nine municipalities of the Comarca, the Natural Park is one of the most important biological reserves in Catalonia. The park, with its stubborn mountain landscape, where the white of the limestone alternates with deep vines and dry-stone walls, offers a rich Mediterranean fauna and flora. The flora, which consists mainly of thickets, includes dwarf palms (an almost autochthonous species in the area, which grows abundantly there), sedges (a plant difficult to find outside the park) and species of African origin. Less exotic bushes can also be found, such as mastic bushes or small holm oaks.

The further we enter the park, the more the thicket disappears and turns into a forest. Here, because of their variety and splendour, holm oaks and Aleppo pines stand out especially. Therefore, the historical hubs are the two main towns, Castelldefels and Sitges.

Sitges was founded by the old Iberians in the 3 to 4 century B.C. Already in the 1st century, there were two town centres on the territory of Sitges. In Roman times, the port of Sitges was used as a transhipment point for Penedès products, the region around Vilafranca. During the 11th century, a castle that belonged to Barcelona was located on the site of today’s Town Hall. The de Sitges family ruled from 1116 to 1814. In 1814 Sitges became free and joined the crown. Afterwards, the city went through various wars as well as periods of hunger and epidemics. At that time, people lived mainly from agriculture, fishing and the goods handled in the port.

In the 19th century, it benefited from the royal decree that allowed Catalonia to trade directly with America. 27% of Catalans who traded with America came from Sitges. The trade mainly concerning clothes, wine and spirits. In the second half of the 19th century, many former inhabitants who had brought wealth to America, they called “Los americanos”, returned to Sitges. Here they built magnificent villas, which can still be seen today. With the capital they brought with them, they built spinning and shoe factories. This developed into a large shoe industry in the 20th century, in which 80% of the adult population was active. Today there is only one shoe factory left. Instead of the fishing and shoe industry, the many incomes comes from tourism today.

What to do in Sitges

Sitges hosts different festivals during the year. First its starts with the  – Reyes Magos Parade on 5. January and at 6 pm. This festival is all about a magical night with royals, who collect the last-minute wishes of the citizens when they take off from Barcelona. But magical is not only the Reyes Magos Parade, you can also enjoy the recurring event of CARNIVAL starting from the 28th of February until the 6th of March. After that, the Sitges Vintage Car Rally takes place in March. This Rally is made for historical cars. So this Rally is for lovers of the old-fashioned driving experience. A speciality is the INTERNATIONAL FILM FESTIVAL in Sitges in the month of October and it is the oldest in Spain.

If you are looking for a place to stop and eat, read our article on the best restaurants in Sitges

In addition, Sitges offers also a good number of restaurants and Tapas-Bars. Located in the old town center, you will find El Cable Bar, a very good place for Tapas and beer. Not far away you will find Merci fish& chips. They are offering traditional Spanish and Catalan food. For a good coffee and breakfast, we can recommend you the Forns Enrich and for the sweeties. All of them are located in the center of the town. The history of the castle and the church of Castelldefels dates back to 996 A.D. when the castle was initially only a defensive tower designed to protect the church. The castle, which gave its name to the town, was initially called Castrum Felix, which later became Castelló de Fidels. On the site of the Church of Santa Maria del Castell at the castle, archaeologists found remains of various cultures, including an Iberian cistern carved into the rock and a Cippus. Excavations from Roman times can now be seen under glass inside the church. Remains of two-storey houses from Roman times were also found on the castle hill.

What to do in Castelldefels

Castelldefels is one of many suburbs in Barcelona. Located directly to the south of Barcelona, You are able to get fast in and out of Barcelona. This is, of course, interesting for all those who prefer the proximity of a big city. For the perfect start to the day, we can recommend you Cafeto de Villa.

If you are searching for a diner then is the Restaurant Amar your choice. This Restaurant is famous for its seafood. It is located right on the beach in the town of Castelldefels, a nine-year-old restaurant that specialises in rice dishes, fresh seafood, highly prized fish and top quality meats. The cuisine is based on traditional Mediterranean cooking, maintaining the traditional recipes.

How to get to Sitges and Castelldefels

You have many options!

If you drive by car just take the C32 Motorway on the coastline of Costa del Garraf.

But you can also take the train R2 from multiple stations in Barcelona, for example, the Barcelona Sants or Estaćio de França.  You can eco-friendly relax and it takes just 30 to 45 minutes to Castelldefels prices starts from 2-10€.