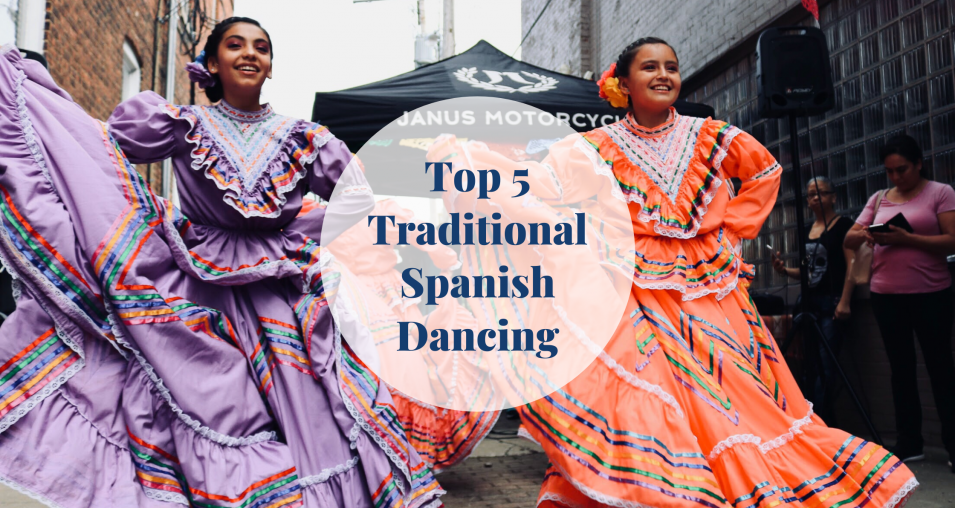 The first thing that comes to mind if you think about traditional Spanish dancing is Flamenco. You see a beautiful tall woman in a red dress with black dots whipping her skirt from side to side. But there are many variations widespread across the country. From the gypsy communities of the south, to the Celtic heritage of Galicia in the north. The rich and diverse culture of Spain is perfectly captured in our top 5 of traditional Spanish dancing. If you always wanted to go to Barcelona to learn one of these dances, but can’t right now. Don’t worry, there are a lot of dance schools giving online lessons. This way you are ready when you finally get to Barcelona in person. We need to start  with FLAMENCO, this is the most famous traditional Spanish dance. In fact it is so much more than just a dance; it’s an art form based on the various folkloric music traditions of Southern Spain. UNESCO even declared flamenco one of the Masterpieces of the Oral and Intangible Heritage of Humanity in 2010. The oldest record of flamenco music dates to 1774 in the book Las Cartas Marruecas.

Flamenco has been influenced by the Romany people in Spain. But its origin and style are uniquely Andalusian. Flamenco has become widely popular all over the world, especially in the United States and Japan. Fun fact, there are more flamenco academies in Japan than in Spain. The dance is a sensuous display of fluid motion, stylised and yet highly personal. It involves a lot of movement of the arms, upper torso, hand and finger, footwork, and heel work. Another very famous Spanish dance is the Paso Doble. The Paso Doble is a fast-paced dance based on the rhythm and movement of a bullfight. But it started as a Spanish military march used by infantry troops. Its speed allowed troops to give 120 steps per minute. The Paso Doble is also shown in a lot of 18th century comedies. As a ballroom dance it is usually performed in pairs, one man and one woman. With the former said to represent the matador or bullfighter. The Paso Doble has a set structure. It consists of an introduction based on the dominant chord of the piece. This is followed by a first fragment based on the main tone and a second part called “the trío”. Each change is preceded by a “brieph”. And the last segment of the Paso Doble is usually “the trío” strongly played.

Zambra is one of the most sensual dances on our list. This dance traces its Moorish roots back to Granada and the Romani people who settled there. The Zambra is a version of the Flamenco but there is a heavy belly dancing influence in the style and movements. Even the costume, with a shirt tied to expose the dancer’s mid-drift and long flowing skirts, differ highly from the Flamenco. The dance is preformed barefoot, and began as a celebratory dance at weddings. Now it’s performed in various neighbourhoods around Granada for the tourists. Fun fact: it was actually banned in Spain for a while because it was too sensual.

This dance is one of the national folk dances of Spain. Its origin lays in the Aragon region. But there is a distinct differences in the dance depending on where it is being performed. These differences can range from what musical instruments are accompanying the dancers to the costumes to when the dance was traditionally performed. The dance is highly energetic and consists of lots of quick steps and jumping. Some say it is a courtship dance. Jota is practiced the most in Aragon, Valencia, Catalonia and Galicia. The best known is the Aragonese Jota, which dates back to the 18th century and was particularly fashionable in the 19th century. A dance found in the north-western region of Galicia. The Muiñeira is an example of the Celtic influences on the local culture in this part of the world. One of the most obvious parallels with Celtic music is the use of a type of bagpipe known as a gaita to perform the accompanying music. There are some regional variations of Muiñeira, for example the Muiñeira de Chantada. It is also very similar to “the Jig”, its Celtic cousin. The dance is very energetic, playful, expressive and lively. The playful character is combined with a social component expressing gallantry. There are two very famous Muiñeira performers: Carlos Núñez and Susana Seivane.

There are a lot of dance schools in Barcelona that can teach you the beautiful art of dancing. The funny thing is that the most dance school teach you Salsa and Bachata. These dances aren’t originally from Spain but are practiced a lot in Spain. During these difficult times a lot of dance schools are offering online classes to their members. If your not a member don’t worry there is enough time to sign up and support your local dance schools. Or you can just look up some videos on YouTube. This way you can be ready next time you are visiting Barcelona.

If you’re planning a trip to Barcelona and are looking for somewhere to stay, why not head over to our apartment rentals page. Please feel free to contact us if you have any questions or are interested in renting with us!

2021-04-21
Barcelona-Home
Previous: Top 8 typical Spanish dishes
Next: What to keep in mind when going to Barcelona