Home / About Barcelona / The Catalan festival of fire: Correfoc 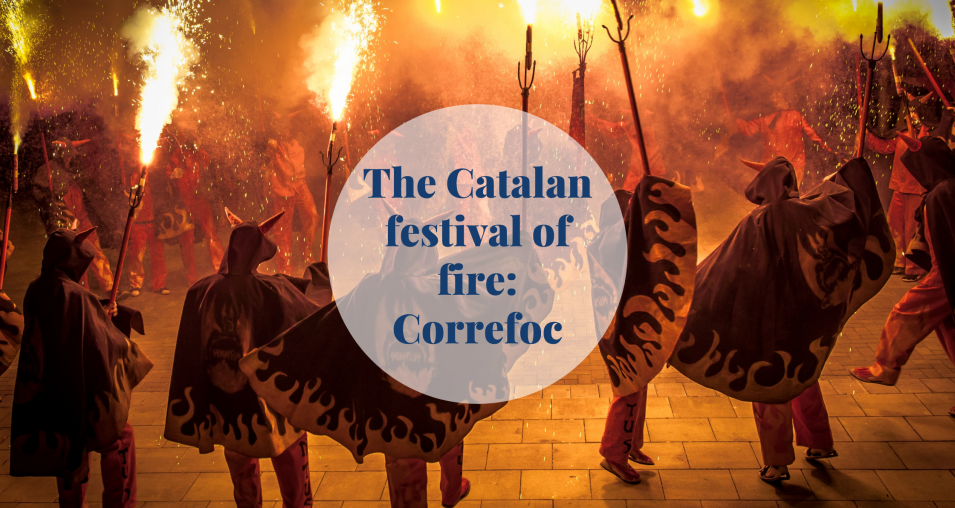 The Catalan festival of fire: Correfoc has a good chance of becoming the highlight of your trip. Once you have witnessed it once you will never forget it. Keep on reading and find out why.

A Little explanation of Correfoc

If you translate Correfoc literally it means “fire-run”. The fire festival is said to be the most striking Catalan festival in the year. The tradition (in its current form) originated in 1078 at one of Cataluña’s annual festivals, La Merce. However, there is an even older dance tradition. Allegedly Correfoc evolved from Ball de diables (“the devils’ dance”). This medieval practice is a representation of the struggle between the good and evil. This performance was usually presented in between the entrees of the nobility in the Middle Ages. What to expect at the festival

Correfoc is an open-air performance, during which people dress up as devils and other monstrous creatures. They light up fireworks and dance to the sound of rhythmic drums. The performers create all kinds of patterns in the air using the burning sticks that they carry. The artists are usually surrounded by spectators, who providently wear clothing that could protect them from small burns. People that are watching react in different ways. Some want to come as close as possible and some want to enjoy from afar. However, the best way to experience Correfoc is to run along with the fire together with the demons.

Correfocs festivals are celebrated in different cities and they are never the same, because of customs and traditions. In Sitges it is common for a crowd to line the side of the street, while participants run trough a tunnel of fireworks. In other cities groups bring various sculptures that spit fire. The sculptures that they bring can be in all forms and shapes. For instance, in the past we’ve seen a large recreation of Gaudi’s dragon from Park Güell, with fireworks in its mouth and all down its back and tail. Another version takes places in L’Arboc with the famous Carretillada. During the evening, the town square is decorated to look like Hell. Before dinner “devils” burn their carretilles (carts) and jump around. It doesn’t matter to which city you go to watch and celebrate the correfocs, the show will always be incredible.

Because Correfocs is strongly connected to the Catalan identity, there’s actually a high chance of coming across a Correfoc on any celebration in Catalonia. Some other events that are always accompanied by a fire show are La Mercè in Barcelona (usually takes place in September), Festa Major de Gràcia in Barcelona (in August), Festival of Santa Tecla in Tarragona (no exact date) and the Festival of Saint Narcissus in Girona (the end of October). During Correfocs you can see fire demons of all ages. There are even little children running around like monstrous creatures. That’s because the tradition of participating in this festival is usually passed on from one generation to another. The performers often constitute a ‘professional’ group of friends and families. It is not that surprising for families to be involved in Correfoc and it’s not as dangerous as it might seem, since they know how to adequately protect themselves. The tradition actually has been banned under the dictatorship of General Franco. He did not only ban the Correfocs but also other regional traditions that weren’t strictly “Spanish”. But lucky for us, now it’s back. And not only that but the Catalans are also free to speak their own language and celebrate their colourful cultural heritage.

We recommend you to wear cotton clothes with long sleeves if you to visit one of the Correfocs. It also is a good idea to wear something to shield your eyes and cover your neck and of course appropriate footwear. If you are planning to be close to the fireworks please think of your ears and bring some earplugs. The organisation also helps by setting out buckets on the streets just in case people accidentally catch on fire. Just please be careful when you are near the fire, because fire is still fire. Have a good night sleep before the day of the festival because it can go on for hours. Finally, make sure you enjoy yourself!

Looking for a place to stay during your trip to Barcelona or the surrounding areas? Check out these fantastic apartments for the perfect stay!