Home / About Barcelona / Moving to Spain? These Tips Will Give You the Window to Get the Best Experience 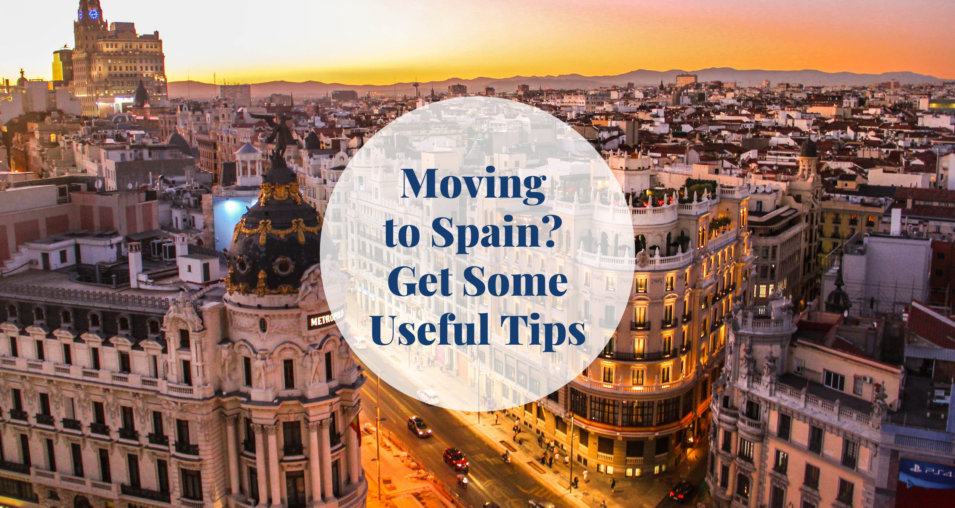 Moving to Spain? These Tips Will Give You the Window to Get the Best Experience

Moving to Spain? These Tips Will Give You the Window to Get the Best Experience

When you think of moving to Spain, it might feel as if you are going to enter into a world of festivity, a carefree lifestyle, sunshine-filled days, and food – a lot of it. Yes, Spain has all this. In fact, it has more than this. Its rich history, untouched culture, Antoni Gaudi’s marvellous architectural creations, and mesmerizing towns that seem like coming straight from a fairytale can make anyone think that Spain is nothing less than a paradise. So no wonder that you have also decided to move to Spain to get drenched in the beautiful colors of Spanish life.

But beyond festivity and finely sprawled beaches lies the ‘normal’ Spanish life that has its own fair share of distinct set patterns, systems, and codes that can give you a tough time if you come to Spain unprepared. So before coming to Spain, you have to look beyond its rainbows and clouds to get a reality check of what it really feels like living in Spain. Here are given a few things you must know before moving to Spain for the ultimate experience:

If you are coming from the other regions of Europe, you will see that Spain goes easy on your pocket – comparatively. Though the living cost varies in its different cities, Spain overall doesn’t make a hole in your pocket. From food, utility bills, rent, and other expenses, you can survive on around 800 to 1200 euros. But don’t forget that if Spain is cheap, wages are also meagre here. So do lookout for a better job before moving here if you want to live a good life.

Unlike England, the Spanish housing system works on different grounds. Most people don’t own a full-fledged home with a garage and posh garden. Most of them live in apartments. And it is better for you initially because affording an apartment is quite reasonable here. Even if you don’t have money to rent a lavish apartment, you can still find an affordable place to live without breaking your bank. Don’t worry about shifting’s hassle because if you have hired professional removals to Spain, they will handle all the fuss.

However, you need to do proper research and take the help of a professional because rental conditions here are different and legally intricate. So make sure you make conscious decisions with the help of an expert. You will find Spanish people very friendly and welcoming. In fact, they have some innate free-spirit vibes and take things in a very casual way. But if you are coming from the UK, one thing that might annoy you about Spanish people is: they are way too loud. I mean, if you are sitting in a bar, everyone would be talking so loudly and laughing their hearts out that either your head will start spinning or you will also start shouting to get your words across to the person sitting on the other end of the table. If you don’t have any issues with loudness, things are all good with the Spanish people. They are good folks, and they will love to know about you and your culture. So integrating with the people is not an issue in Spain.

If you are coming after bearing the cold winter spells of other European countries, Spain’s weather will seriously blow a new life for you. Its weather is so good that you don’t have to struggle to keep your sanity intact during winters because they are mild. Summers can get hot, especially during the June to August period when the sun shines like anything. But overall, Spanish weather is perfect for those who want to shoo away cold winter spell or hot summer burns. But remember that Spain is not a small country. This weather condition is prevalent in most parts of Spain, but some places do come up with their own weather mood swings that are unpredictable. Like, Bilbao is very rainy, so rainy that you start hating rain at one point in time. So do select your desired region after doing some research if you want to take a plunge into the pleasant Spanish weather, not the harsh one.

It is Regional Classified Overall, moving to Spain is a good decision – in fact, very good if you want to live your life to the fullest. But be sure that if you are moving to Spain, you have an excellent job in your pocket and you choose the right city to live in. These two decisions will have a massive impact on your quality of life!