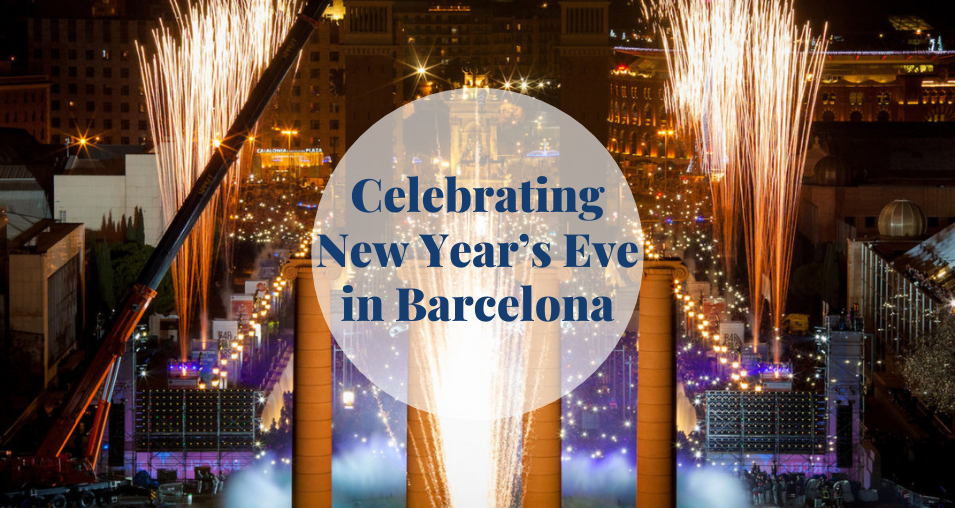 It’s the world’s biggest party of the year and trust that Barcelona will not disappoint when it brings the new year’s in a heck of a style. Even though Catalonia’s tradition lies towards family, it has followed the footsteps of cosmopolitan cities like London and Amsterdam, celebrating with music banger, fireworks, and a massive public countdown. This will allow you to start your night with a traditional Catalan dinner with a side of Cava with your friends and family followed by heading to Barcelona’s biggest clubs for a countdown. Here are some of our choices for the best parties you could attend to complete your new year’s eve celebration after your dinner or the fireworks show!

A lot of restaurants put together a special new years menu just for the occasion. Take a look at some of our suggestions, we’re sure you’ll find a place that suits your family dinner needs. If you’re a fan of Mediterranean cuisine and live jazz then maybe this is the place for you. Little Italy is a cozy restaurant in the heart of the urban Born district. The New Year’s Eve menu which is 80 euros includes different sorts of delicious bites, from shrimps to sirloin steak and more.
Address: Carrer del Rec, 30 For a more electric and modern feel in Barcelona on New Year’s Eve check out Cafe Kafka, located near Barcelona’s Ciutadella Park. The special New Year’s Eve menu is 95 euros, drinks not included. They offer a gastronomic New Year’s Eve in Barcelona that you won’t forget featuring dishes such as Scallops with corn and wasabi foam and Monkfish and shrimp Suquet.
Address: Carrer de la Fusina, 7

New Year’s Eve in Barcelona, Nochevieja in Spanish and Cap d’Any in Catalan, can be celebrated in various locations and in many different ways around the city. There isn’t any single destination where people celebrating the turn of the year should be going, but what we do have is a collection of possible options for the evening, both early and late into the night! In this post we’ll be presenting the most notable New Year’s Eve events you should consider for an unforgettable night in Barcelona and the answer to Where to Go on New Year‘s Eve Barcelona.

On La Nochevieja, which means ‘the old night’ in Spanish, families, and friends often gather together to enjoy a late meal, the last one of the year, before hitting the big parties. According to Spanish tradition, you should wear red underwear and eat twelve grapes at midnight, one at each chime of the clock in the countdown. These two traditions are said to bring good luck. The fireworks are held near Plaza España, around the beautiful Font Magica. If you are someone who wants to celebrate new year’s with the locals, then heading to the Montjuic an hour before the countdown is the way to go.

One of the biggest parties of the night happens at Poble Espanyol, which is located very close to the Magic Fountains of Montjuic. This venue features three separate spaces with different atmospheres and music inside the place. Remember to wrap up to stay warm as it’s located outside with a lot of space, a marquee and a VIP area that can be reserved for a limited number of people. The party at Poble Espanyol is one of the biggest and most popular events during New Year’s Eve in Barcelona, with almost a thousand people attending both from Barcelona and from all around the world. They play all the hits, in a unique atmosphere until the sun comes up. Once again Montjüic, just above Plaça d’Espanya, is hosting Barcelona’s official New Year’s Eve celebration. A light-filled event with music, special effects and a wonderful pyrotechnic display centred around the Magic Fountain. This family-friendly event is hugely popular with the locals who head there in the thousands so make sure you get there early so as to get a decent spot. It begins at around 11 pm and is free.

Use Tarragona metro station afterwards if at all possible. It’s a little further but it will be a lot less crowded than Espanya metro. 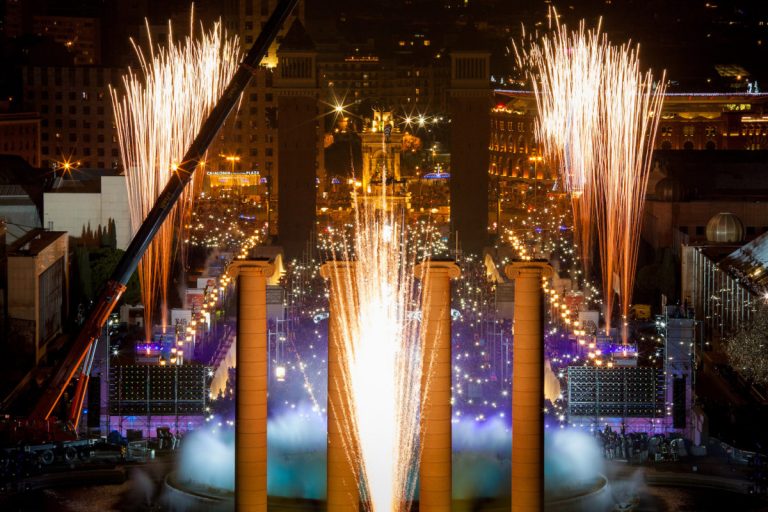 If you plan to arrive around 11:30 p.m., keep in mind you’ll most likely be really far from the action and, in some cases, the metro might even stop running all the way to Plaza Espanya due to the huge crowds. Also, the commute back to your flat or hotel will be insanely crowded. Long lines form at the metro stations, and, in many cases, metro trains will be so full you can’t get on. So be very vigilant and try getting a cab!

Plaça Catalunya gets absolutely packed on New Year’s Eve because of its central location. You’ll find locals and tourists alike drinking cava and celebrating the new year together in a great atmosphere, they enjoy a rather wacky tradition that will take you by total surprise if you’re not warned. Post-strike of midnight, thousands of people will collectively throw their Cava bottles into the center of Placa Catalunya. A nightmare for the health & safety conscious!

If you do forget your grapes and Cava, fear not as there will be plenty of people around ready to help you out… for a price.

Finding accommodation during the holidays can be difficult because of the busy season, so if you’re planning to celebrate new years in Barcelona and still don’t have a place to stay, We would love to help! 2021-05-17
Barcelona-Home
Previous: 5 places to visit in Barcelona by Motorbike
Next: Top 5 Restaurants in Costa Brava