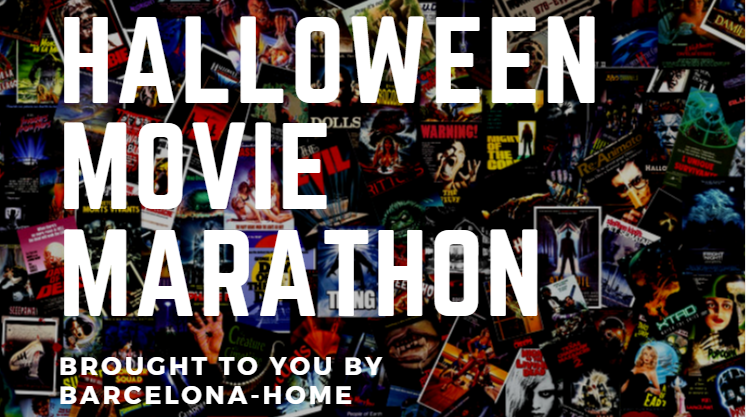 Halloween is being celebrated more and more each year around the world, with some people even considering it their favourite holiday! What started off about 2000 years ago as a Celtic festival to ward off ghosts has transitioned into a mostly international holiday with roots growing through so many cultures. Nowadays, even Halloween movies play a huge part in the festivities, with many people enjoying the thrill involved! In Barcelona, it’s no different, with a ton of Halloween events going on all over the city. See below for a special Halloween in Barcelona – la Massa Critíca event!

So October 31st is right around the corner again, an excuse to either go out and get spooky at some wild party, check out the haunted houses in the city, take the kids trick or treating or just stay home and bask in those mini chocolate bars and the endless Halloween candy.

One of the best ways to celebrate halloween if you aren’t planning on dressing up and getting out is watching back-to-back spooky films all night! So here we have a list of the best movies for a halloween movie marathon.

I want to start with a list of the movies that have defined the full Halloween Experience for me growing up. Kicking it off with:

Now if I’m being honest I was slightly creeped out by this movie as a kid but after a few years, it only grew to be one of my top picks for a Halloween movie must! To follow it up we, of course, have the:

Another of Tim Burton’s works, which I personally think could also be considered a Christmas classic.

Next up would be the Addams household, an eccentric wealthy family who are seemingly unaware, or just don’t care, that other people find them frightening and bizarre. There are many remakes of this intriguing story so go ahead and have your pick.

Other movies I could add to this would be:

As much as Halloween is meant to be spooky there is also a hint of magic and magic comes with witches, wizards and so much more. So, if you’re staying in with the kids, these movies would be great to keep them occupied for a while:

There are about 5 of these movies featuring some old Disney stars you might have forgotten about!

While we’re on the topic of witches the next movie is about three sister witches who are ready to stir up some trouble:

To add some ghosts to the mix I would suggest none other than the friendly ghost everyone knows and loves. There are many different movies created around Casper both animated and real-life renditions.

Looking to fill the whole weekend with movies?

The Truly Scary ones

Moving on to the more thriller side of Halloween filled withthe supernatural and chainsaws I would recommend the following:

Wes Craven’s classic slasher film, in which several Midwestern teenagers fall prey to Freddy Krueger, a disfigured midnight mangler who preys on the teenagers in their dreams — which, in turn, kills them in reality.

#A Nightmare on Elm Street

A movie that blew up when it came out was SAW, do you wanna play a game? then go back and sit through the freaky events that follow.

Really diving into the supernatural with a hint of ghosts, possession and pure fright would be:

There are even several sequels if you really looking to get into it!

Several other recommendations are following:

Looking to rent an apartment in Barcelona? Check out our SPECIAL DEALS ON APARTMENTS all over the city with Barcelona Home!