You cannot visit Barcelona without spending time in Eixample! L’Eixample, which means “the extension” in Catalan, is the upper part of Barcelona city center, and a complete opposite to the lower part, Ciutat Vella. While Ciutat Vella is filled with small curvy, narrow claustrophobic streets. Eixample neighborhood is a perfect grid of large boulevards surrounding building blocks of the exact same size. This means that there are modern spacious apartments. Many of the buildings in this area of the famous Catalan Modernist style. It has the highest concentration of Modernist buildings in the world. Eixample is also home to the famous shopping street Passeig de Gràcia, which is filled with designer boutiques, fancy restaurants, and modern bars.

This area is filled with must-see places! Eixample is home to the world-renowned Antoni Gaudí designed church, La Sagrada Família, the church that will never be finished. Or now it seems it will, as it has been announced that it is expected to be finished in 2026, on the 100th anniversary of Gaudí’s death. Eixample is also home to some other very famous modernist buildings, like Casa Batllo and La Pedrera, and the Arc de Triomf, the Barcelona equivalent of Paris’ “Arc de Triomphe”. There are also several nice parks in the neighborhood, for example, Placa de Gaudí, Placa de Tetuan, and Park de Joan Miró, where you can sit down, relax and even have a picnic. 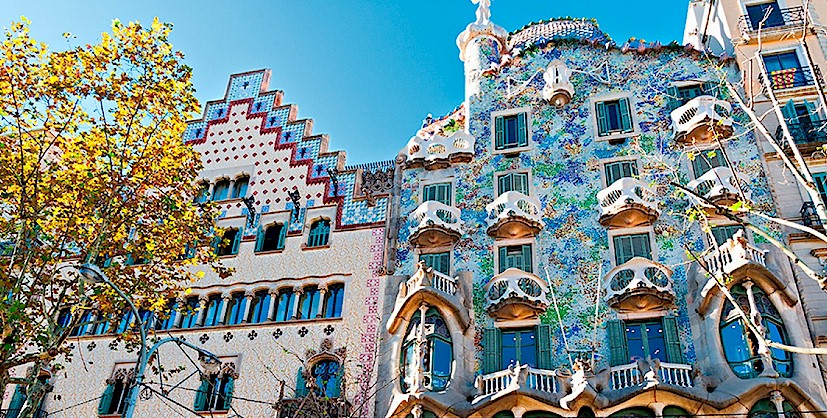 Eating out in Eixample Neighbourhood

Drinking and Clubbing in Eixample

If you like to drink once in a while, head over to the left side (Esquerra) of Eixample. The right side (Dreta) is more residential while the left is more commercial with shops, bars, clubs, and restaurants. Eixample Esquerra has a number of great bars that will satisfy your drinking needs! “Espit Chupitos” boasts of more than 500 different shots, a wonderful place to kick off your night in style.

Eixample neighborhood has more than a fair share of clubs and party locations. If you would like to try something a bit more interesting and fun than your average club, give the “Mojito Nightclub” a try. Here it is all Latin, with salsa, samba and other Latin dance moves being shown on the dance floor. One of the most famous clubs in all of Barcelona is “La Fira“, which due to its huge dance floor is always worth a visit.

Eixample neighborhood is home to one of Europe’s most famous shopping streets, Passeig de Gràcia. On Passeig de Gràcia you will find the stores of many of the worlds biggest designer brands, such as Dolce and Gabbana, Karen Millen, and Burberry. The stores on the Passeig de Gracia are mainly high end, but you will also be able to find the inevitable Zara, H&M, Nike, and Mango Outlet store in the area. In addition to individual stores, you can find Arenas de Barcelona shopping center close to the left border of the neighborhood and El Triangle shopping center in Placa Catalunya.