What to do this weekend June 21st to 23rd

You do not know what to do this weekend? Do not panic, our Barcelona-home professionals’ team sought the activities and events not to be missed during this long weekend through Monday holiday! So, ready to enjoy thoroughly? Read on!

What is most attractive about the NIGHTLIFE in Barcelona is its variety, of course. You have a unique opportunity to experience several nightclubs in this city that play every kind of music you can think of. If you still don’t know what to do this weekend on Friday or Saturday night, check out the list of our favorite party venues. Make the most of the weekend and explore what Barcelona has to offer!

Surround yourself with breathtaking views of Barcelona’s skyline and beaches while dancing to the freshest House Classics at ECLIPSE, Barcelona’s most elegant club. Get your dancing shoes ready for the Friday night spent at the top of W Barcelona Hotel!

Friday’s Loyalty party at OPIUM welcomes you with fresh beats by DJ Alemany and Dany Cardenas. Opium is one of the trendiest clubs in Barcelona, which hosted big names of the music scene such as Avicii and David Guetta.

Haven’t been to SUTTON before? Then you’re missing out on a lot. Club Sutton, is located in Eixample, close to Avinguda Diagonal and it’s easy to get there. This Friday is A La Mode with DJ’s Carlos Ramos and Alberto Martin!

The Born festival begins June 21 with a parade in the streets. Many activities are planned in the 17 areas of the district. The pricipaux places if you want to see the parade are Commercial Plaza, Plaza of Sant Pere, Sant Agusti Plaza de Vell Argenteria street, el Passeig del Born, and El Paseo Lluís Companys. Towards the Arc de Triomf, you will also have an unobstructed view of the parade. The Born festival is considered the biggest festival of the Old City of Barcelona. It is celebrated in honor of Sant Pere, his boss, and takes place in the districts of Santa Caterina, the Ribera, and Sant Pere. After the parade, a speech is given at the gates of the Convent of San Agustín. This speech will be given this year by the Centro San Pedro Apostol celebrating its 126 years of existence in the area.

What better way to Carpe Diem a Saturday without going to the CLUB CARPE DIEM and have a crazy night full of adventures with your friends? Don’t forget to bring your most comfortable shoes as you’ll probably be dancing all night long to the best house beats!

You can’t miss Saturday night at OAK! Dance all night to the mix of fresh music and commercial hits of all kind until your feet hurt. See you there!

Last but not least, don’t miss SHOKO this Saturday! As always, you can expect the best hip-hop and R&B music at Shoko. Don’t forget to sign up on the LIST for free entrance before 1.30 am!

Gay Pride is a highly anticipated event in Barcelona. This year, it offers many surprises such as concerts and exhibitions. There are lots of activities for everyone. As every year, the most gay-friendly district of Barcelona which will host the majority of events is the Eixample Esquerre. On the occasion of the Gay Pride in Barcelona, neighborhood stores offer their best sales for the fair of gay pride. There are also different shows throughout the day. And in the evening from 18:00 to 2:00, go LGBT party at Eixample to burst a good part of the night in a super friendly atmosphere.

The International Women’s Film Festival focuses on a committed cinema. It aims to highlight the little-known pioneers, new directors, and filmmakers expert. The festival takes place mainly in May and June this year. The festival program led to the discovery in Catalonia cult directors like Agnès Varda or unknown directors, rebellious and transgressive, like Alice Guy, Lois Weber, and Ulrike Ottinger, among others. Since 2014, the festival has an online file that contains information about the works of more than 600 filmmakers from around the world. If you are a fan of cinema, do not hesitate to take a look at this festival and take a look at this file!

The Revuelta of Sant Joan

From 20 to 24 is celebrated the Revuelta of Sant Joan every year. The most important is the night of Sant Joan which is on the 23rd and on the following evening, there is a celebration of Sant Joan. This event is related to the cult of the sun. Indeed, the solstice fires were originally pagan festivals but the Catholic Church was then Christianised the event according to its tradition. In Catalonia, the feast of St. John is the feast of John the Baptist. Indeed, the religious festival is linked to the story of John Baptist according to Sant Luke. Thus, on June 23 the Barcelona take to the streets or organize parties at home for the festival of Sant Joan, the Verbena de Sant Joan in Spanish. In the program, you can admire the fireworks on the beach, dance and enjoy glasses of alcohol. Be prepared, there will be many people, this tradition is widespread! It’s going to be the loudest and shortest night of your life!

For the feast of God, eggs dance over the water that jetted fountains; literally. The fountains are blooming just for special occasions. There is also an early evening procession and Catalan folk dances. So that the egg does not fall, the eggshell is placed under the jet of water so as to rotate without falling. The places where one can see this tradition in Barcelona are Barcelona Cathedral, the Poble Espanyol, the Frederic Mares Museum, the parish of Santa Ana, the Casa de l’Ardiaca, Ateneo Barcelonés, the parish of Puríssima Concepció and the Real Academia de las Letras Buenas Barcelona, also in college Escolàpies LLURIA. Besides Barcelona, the tradition of the Or Com Balla has also spread to other cities as the Palacio Maricel Sitges, Tarragona and the fountain of the cloister of the cathedral. 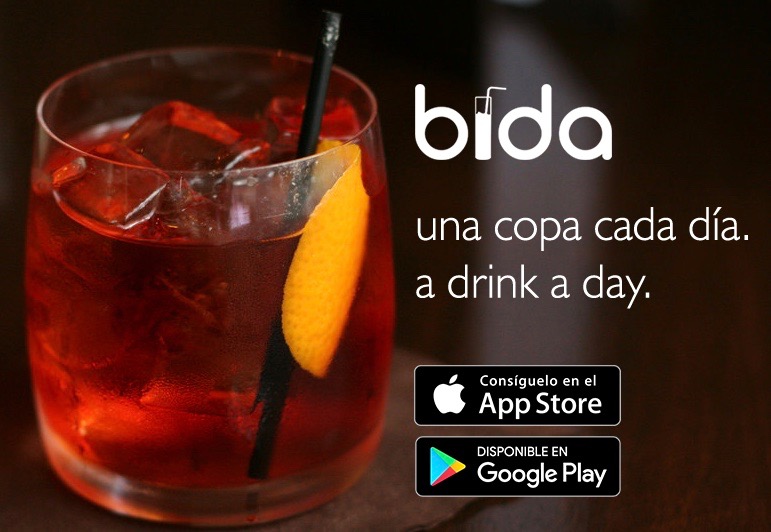 Drink-a-day is already a well-known concept in New York City and Los Angeles. It has landed in Barcelona too, where the after-work culture is a growing trend, people are social and love to go out and enjoy a great time with friends. This new concept here in Spain is called Bida and is a subscription-based app that gives its members a FREE DRINK EVERY 3 HOURS at the bars of their choice. Bida is the perfect tool to help visitors and find the ideal place to enjoy incredible drinks. Do not hesitate and download the app today!

For all Barcelona-Home clients, we have a special offer:

When signing up, type the invite code “BCNHOME18” to get your first drink for free. After that, subscribe and get the following offers: