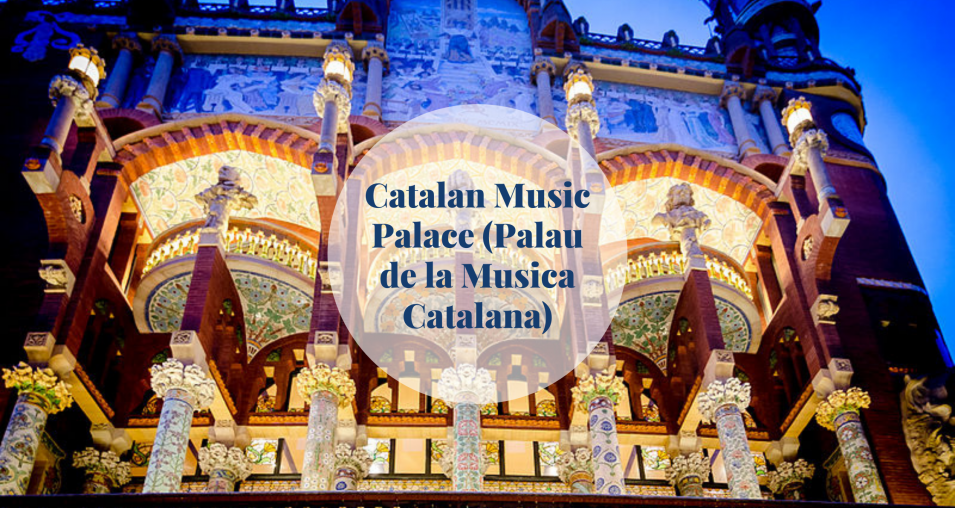 Barcelona’s Palau de la Musica Catalana, also known as the Palace of Catalan Music, is a concert hall designed in the Catalan modernism style by the architect Lluís Domènech i Montaner. It was built between 1905 and 1908 for the Orfeó Català; a choral society founded in 1891 that was a leading force in the Catalan cultural and political independence movement that came to be known as the Renaixença, or Catalan Rebirth.

In 1909 the Palau won the Architect, an award given by the Council to the best building from that year. Between 1982 and 1989, the building underwent extensive restoration under the direction of architects Oscar Tusquets and Carles Díaz. In 1997, Barcelona’s Palau de la Musica Catalana was declared a UNESCO World Heritage Site. Today, more than half a million people a year attend musical performances in the Palau that range from symphonic and chamber music to Jazz and Cançó (Catalan song). Sometimes, they also play Flamenco and Pop music. Check out the website to see who will be performing next. 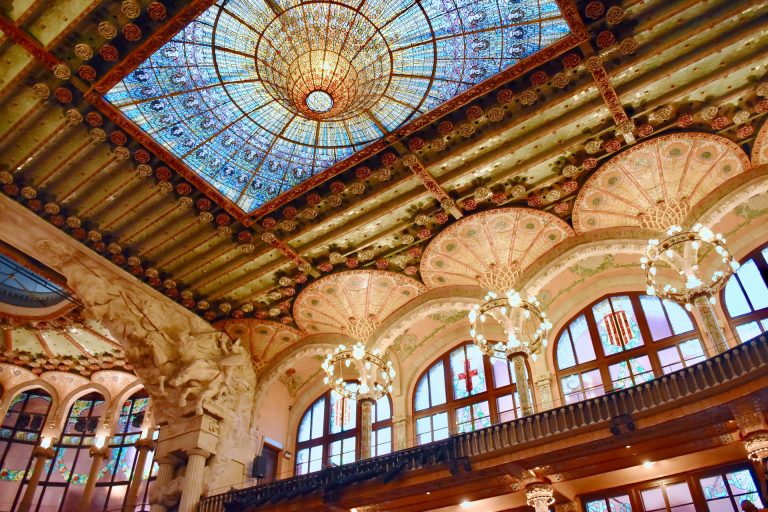 Inside the Concert Hall

The concert hall of Barcelona’s Palau de la Musica Catalana, which seats about 2,200 people; is the only auditorium in Europe that is illuminated during daylight hours entirely by natural light. The walls on two sides consist primarily of stained-glass panes set in magnificent arches, and overhead is an enormous skylight of stained glass designed by Antoni Rigalt whose centerpiece is an inverted dome in shades of gold further surrounded by blue that suggests the sun and the sky.

Moreover, the dominant theme in the sumptuous sculptural decor of the concert hall is choral music, something that might be expected in an auditorium commissioned by a choral society. A choir of young women surrounds the “sun” in the stained-glass skylight, and a bust of Anselm Clavé, a famous choir director who was instrumental in reviving Catalan folk songs, is situated on the left side of the stage, under a stone tree. Barcelona has many other venues for classical and contemporary shows, as well as excellent dance performances. However, the Palau de la Musica Catalana is the most spectacular venue of all; and so should be at the top of your list. Why not have a drink under the sparkling mosaics of the palace’s columns before taking the majestic staircase to enjoy your concert in the auditorium. Dust off your smartest attire and let this jewel of modern architecture take you into a whirlwind of fantasies. Besides the possibility of attending concerts, the Palau de la Musica Catalana offers a visit with an experienced guide. Within the tour you will visit all its facilities, will be able to look at the famous organ and hear interesting information about the landmark. There is also a skip-the-line walking tour for Palau de la Musica as well as other cultural attractions. Ticket prices vary with each concert, so check out their website to find one to suit you. Bare in mind to book early your tickets, so you don’t miss your chance!

The Palau de la Musica Catalana is on the border of two neighborhoods – the Gothic Quarter and EL BORN. If you are in search of accommodation nearby, there are various APARTMENTS NEAR PALAU DE LA MUSICA available now. For more ideas on what to do during your stay, check out this article on free activities in Barcelona!